Why do I need to test?

Everyone who works in software development has stumbled upon software testing.

Why should a developer know anything about testing?
Well, software testing is a valuable asset and a big part of development: it does not only test the application, it also teaches to think outside the box and to write code with quality in mind.

Software testing is not finding bugs

The goal of software testing is not only to find bugs and “break things”. Testing can range from a pure exploration of functionalities to a deep understanding of the tested application. Testing can give an idea of what, why and how the application is tested together with the guiding concept of quality.

The software may already have bugs before the QA or the developer finds them out by running some tests. If we put it this way it is clear that focusing on enhancing code quality, analyzing the features before/alongside development and having the right amount of tests are good things to do.

However, software testing is an engineering practice that offers support to different areas of software development.

There are, therefore, different methodologies, tools and needs to adopt the most suitable testing activities for your IT world

So how do we plan test design and how can we decide which types of tests suits our application?

There are many types of software tests and different classifications or topologies are defined of which I report an example in the following image:

This type of tests checks that a specific feature functionality is working as intended by the business or user requirement. Differently from the previously seen *Acceptance Tests this type does not rely on a fully functioning application as it only tests a specific feature of it. An example of functional test may be checking that a login component is working as expected.

Smoke tests are usually run before executing other types of tests. This type is very basic as it checks the application is working from high level perspective. These tests can check, for example, that a website’s main page is loaded correctly while different types of tests will check the functionalities right after. Smoke tests should be quick and easy to both automate and maintain.

These tests usually verify that different sections and services of an application work together as expected. This type of test is usually quite easy to automate and maintain but can be very expensive due to the requirement of having different services up and running.

Unit are source-level tests which are executed on an individual portion of the application code: these tests are typically automated and run by software developers. Unit tests verify that the specific unit/function respects the intended design and works as expected. This type of tests is usually seen automated and executed in continuous integration servers.

Performance tests verify if the application performance is compromised during high loads. This type of tests split in mupltiple sub-types:

Load testing Load testing is the simplest form of performance testing. A load test is usually conducted to understand the behaviour of the system under a specific expected load. This load can be the expected concurrent number of users on the application performing a specific number of transactions within the set duration. This test will give out the response times of all the important business critical transactions. The database, application server, etc. are also monitored during the test, this will assist in identifying bottlenecks in the application software and the hardware that the software is installed on.

Stress testing Stress testing is normally used to understand the upper limits of capacity within the system. This kind of test is done to determine the system’s robustness in terms of extreme load and helps application administrators to determine if the system will perform sufficiently if the current load goes well above the expected maximum.

Soak testing Soak testing, also known as endurance testing, is usually done to determine if the system can sustain the continuous expected load. During soak tests, memory utilization is monitored to detect potential leaks. Also important, but often overlooked is performance degradation, i.e. to ensure that the throughput and/or response times after some long period of sustained activity are as good as or better than at the beginning of the test. It essentially involves applying a significant load to a system for an extended, significant period of time. The goal is to discover how the system behaves under sustained use.

Spike testing Spike testing is done by suddenly increasing or decreasing the load generated by a very large number of users, and observing the behaviour of the system. The goal is to determine whether performance will suffer, the system will fail, or it will be able to handle dramatic changes in load.

Breakpoint testing Breakpoint testing is similar to stress testing. An incremental load is applied over time while the system is monitored for predetermined failure conditions. Breakpoint testing is sometimes referred to as Capacity Testing because it can be said to determine the maximum capacity below which the system will perform to its required specifications or Service Level Agreements. The results of breakpoint analysis applied to a fixed environment can be used to determine the optimal scaling strategy in terms of required hardware or conditions that should trigger scaling-out events in a cloud environment.

Configuration testing Rather than testing for performance from a load perspective, tests are created to determine the effects of configuration changes to the system’s components on the system’s performance and behaviour. A common example would be experimenting with different methods of load-balancing.

Isolation testing Isolation testing is not unique to performance testing but involves repeating a test execution that resulted in a system problem. Such testing can often isolate and confirm the fault domain.

Internet testing This is a relatively new form of performance testing when global applications such as Facebook, Google and Wikipedia, are performance tested from load generators that are placed on the actual target continent whether physical machines or cloud VMs. These tests usually requires an immense amount of preparation and monitoring to be executed successfully.

Exploratory testing relies on finding all those not expected behaviors which may be not so obvious to design or cover in a test execution. There’s usually a time limit and a specific part of the application that has to be covered by exploratory tests. When the time limit has expired, the people involved in the execution of these tests must report all the unexpected behaviors they have found on the application.

These tests are some of the most expensive in terms of time. However, they are one of the best ways to cover your application from regression and UI bugs since the majority of the issues that are reported in this phase are usually difficult to find with automated tests.

Another good practice you should check out is the “Test Pyramid”. At the bottom of the pyramid we have unit tests which are quick, easy to mantain and low in coverage, while at the very top we can see UI tests which are slow, costly and with a high coverage.

This pyramid helps the development teams keep a focus on what type of tests should prevail in their codebases, helping them focus on efficiency, delivery and quality at the same time. 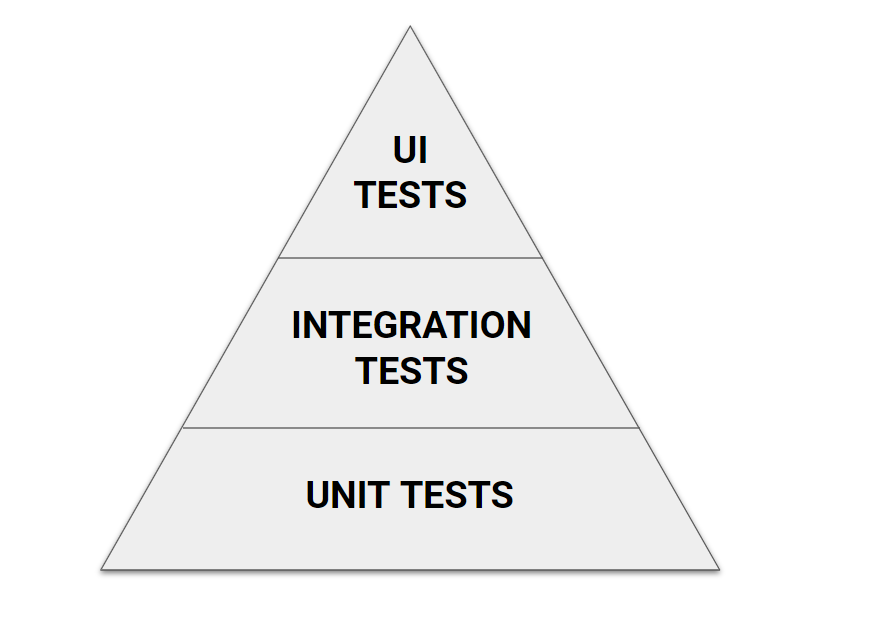 We introduced the idea that software testing does not imply “breaking things” and that there are many types of tests that can support the software life cycle. We now know that it is a good idea to know at least some of them.

Tests are part of the development process and knowing them should be a goal for everyone working on developing an application.

We must remember to check what is the best approach to test our application considering the trade-off between effort, time and coverage. We should take some time with the teams involved in the development process to discuss, review and create some tests!